In The Innocents Abroad (1869), Mark Twain’s first bestseller and one of the most successful travel narratives in American literature, the acclaimed young author singled out and celebrated Damascus in his descriptions of Syria. In 1867, as a 32-year-old reporter for The Daily Alta California embedded with the Quaker City pilgrims, Twain had visited the Middle Eastern country. Highlighting the paradisiacal aspect ascribed to Damascus throughout history, Twain recorded that: 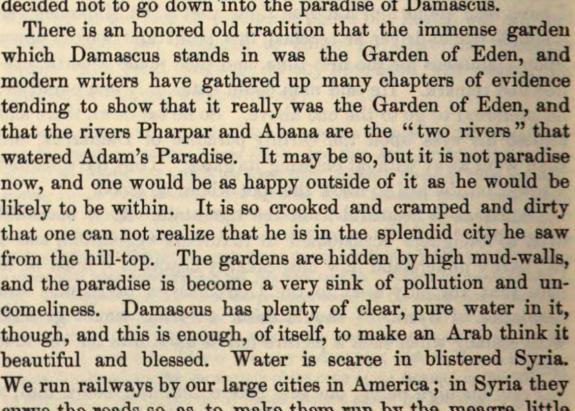 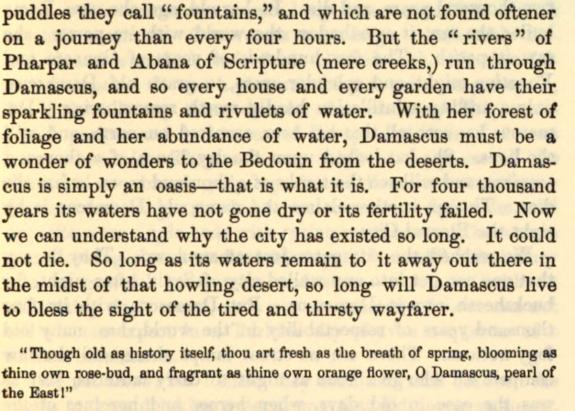 In March 2016 I travelled from Dubai to Hartford, Connecticut, to present a conference paper at the annual NeMLA Convention. The paper, “Mark Twain: A Timeless Writer and Humorist,” discusses Twain’s enduring legacy and how he continues to make front-page news despite the fact that he died 107 years ago. The paper and the NeMLA conference in general set the stage for my visit to The Mark Twain House & Museum, the realization of a 20-year-old wish that had originated during my BA study at Damascus University.

During the guided tour inside the House which was the home of Twain and his family from 1874 to 1891, we were allowed into Twain’s Schoolroom on the second floor. While entering this room, which was Clemens’s study from 1874 to 1880, I had a sudden spell of “Déjà vu.” Something about the room seemed familiar to me as a Syrian. I was completely mystified at first. I had the overwhelming feeling that I was entering a room in Damascus, the capital of my home country. When I found the source of the mystery and was about to interrupt the presentation of the expert guide, she indicated the built-in settee along the windows and mentioned that Twain might have brought the rugs thrown on it from Syria. Indeed, the large divan with the rugs on it looked Damascene. I tried hard to listen to the remainder of what had started as an excellent presentation, but to no avail. I became entirely pensive, trying to find answers to the endless chain of questions that had taken over me: Why a Syrian-inspired divan? Why those rugs? Why did he bother shipping the rugs all the way from Damascus to the United States? How did he ship them? Did he ship other stuff from the other countries he visited on this long trip? Did he have a private plane? A little anachronistic, maybe. But then I remembered that nothing is too difficult for Twain, who has continued, even a century after his death, to distinguish himself as a timeless writer and humorist. The past three decades have marked the discovery and authentication of many new Twain stories, unfinished pieces, and the lost first half of Huckleberry Finn’s working manuscript. And still no one can be certain this is the end of his story.

Recent scholarship in the Mark Twain Studies has uncovered and highlighted Twain’s intention to make his name live well into posterity. Circumstantial and textual evidence has collectively demonstrated that America’s greatest author did everything in his professional capacity to immortalize himself. This is manifest in his wish to keep his autobiography unpublished for one hundred years after his death, and in the Autobiography itself. It is fascinating to observe in the three volumes published between 2010 and 2015 how Twain cleverly employs self-satire and other veils of humor, while nevertheless endorsing himself and his position at the forefront of American writers.

For example, in Vol. 1, he recounts having a conversation about writers with Robert Louis Stevenson in a Washington Square bookshop. When Stevenson asked Twain if he could name the most famous and acceptable American author in the United States, Twain wrote that “I thought I could, but it did not seem that it would be modest to speak out, in the circumstances. So I diffidently said nothing.” Twain humorously added that Stevenson noticed this and consequently told him: “Save your delicacy for another time—you are not the one.” Clearly, Twain’s masterful self-mockery and tongue-in-cheek tone are largely behind his international popularity and acceptance, then and now.

In a recent exchange I have had with the wonderful curators at The Mark Twain House & Museum, Mallory Howard and Steve Courtney mentioned that Twain consciously indulged a Syrian influence in the construction of his former study. According to Courtney, Twain had the builders create a Syrian-inspired settee built in along the wall near the windows. In an 1885 interview that Twain had with Hartford Daily Courant reporter George Parsons Lathrop, Twain showed Lathrop his former study, pointed to the large divan and said, “There was a good idea which I got from something I saw in a Syrian monastery.” Lathrop documented this in “Mark Twain’s Home,” which was published on September 23, 1885.

After visiting Twain’s study and reading his account of Damascus in The Innocents Abroad, I believe that Twain’s fascination with Damascene decor suggests, in yet another way, his desire to associate himself with cultural immortality. In his 1869 travel masterpiece, Twain celebrates Damascus explicitly as a symbol of singularity and immortality: 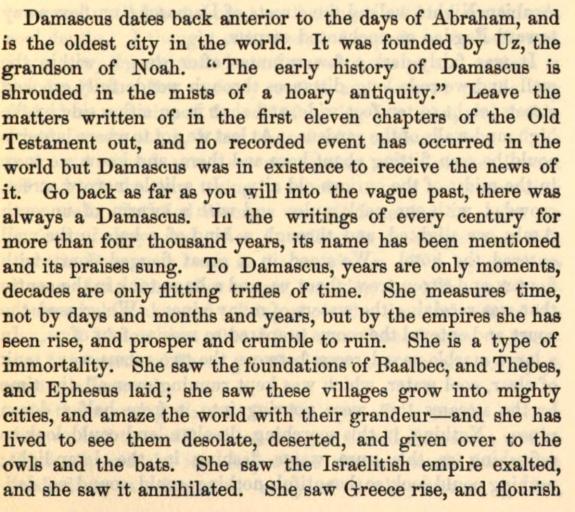 Hamada Kassam is Assistant Professor of English at Zayed University in Dubai. His work has appeared in Mark Twain Journal and Mark Twain Annual. Dr. Kassam, a Syrian national, was scheduled to be a Quarry Farm Fellow in 2017, but was forced to postpone following Executive Order 13769.

9 thoughts on “Mark Twain in Damascus: A Quest for Immortality?”