There is perhaps no greater testament to Twain’s lasting reputation than the habitual misattribution of miscellaneous wit and wisdom to his name. The circulation of such apocryphal aphorisms was common enough in the 20th century. It has only increased with the popularization of digital media. The most common question addressed to the Center for Mark Twain Studies is some variety of “Did he really say that?” Whenever possible, we track down the original source, as well as attempt to trace how their words came to be imagined in Twain’s mouth.

“Kindness is language the deaf can hear and the blind can see.” – The Apocryphal Twain

The Occam’s Razor of Twain attribution is: If the aphorism in question indicates a sentimental, nostalgic, or otherwise optimistic attitude towards humanity, it probably didn’t come from Twain. As Louis Budd put it, Twain indulged a “lifelong suspicion that the mass of mankind is venal, doltish, feckless, and tyrannical, that the damn fools make up a majority anywhere.” Thus, it struck me as unlikely that Twain had such pithy things to say about kindness when this quote began circulating in 2009.

It would appear the popularity of this quotation, which is tweeted dozens of times everyday, as well as the widespread acceptance of its attribution, can be traced to a single individual. “Brad D.” introduced the aphorism to Twitter in January 2008 and has tweeted it 124 times since.

Kindness is a language which the deaf can hear and the blind can read. — Mark Twain

A year into this barrage, he hooked his first influencer: Allison Holker, a veteran dancer from High School Musical who was then appearing as an “All-Star” on  So You Think You Can Dance and would join the Dancing with the Stars cast a few years later.

Embraced thereafter by the usual community of quote bots, life coaches, and motivational speakers, many of whom have tens or even hundreds of thousands of followers, the aphorism was now in daily circulation. Roughly two weeks later it would be tweeted from the accounts of The Trevor Project, The NOH8 Campaign and its founder, celebrity photography Adam Bouska. These LGBT outreach organizations have a combined following in the millions, including many public figures.

"Kindness is the language which the deaf can hear and the blind can see." ~Mark Twain

In the ensuing years, the quote has remained a staple of social media inspiration and activism. However, its misattribution pre-dates its digital perpetuation. It was credited to Twain in a series of self-help books from the 1990s, the first of which, A Compendium of Caring Thought, was produced by The Caring Institute, a non-profit founded by a prominent philanthropist of the elderly and disabled, Val J. Halamandaris.

Only one of these books, Meladee McCarty’s Daily Journal of Kindness (1996), actually got the attribution right. The aphorism originates from Christian Nestell Bovee. In his Thoughts, Feelings, & Fancies (1857), Bovee wrote “Kindness is a language the dumb can speak and the deaf can hear and understand.” With phrasing slightly altered it appeared again in the revised and expanded Intuitions & Summaries of Thought (1862): 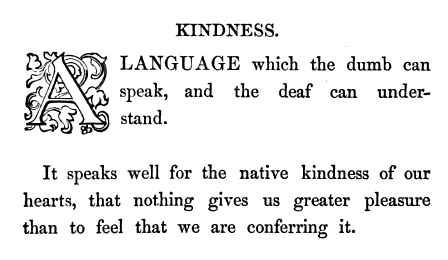 Bovee was a minor Transcendentalist who operated at the fringes of American literary culture for most of the 19th century, dying in 1904 at the age of 84, an incredible endurance for the time. He published his earliest aphorisms in the American Review during the same years Edgar Allen Poe was placing several of his most famous works with the magazine. He was an occasional participant in the Saturday Club which included Ralph Waldo Emerson, Oliver Wendell Holmes, and Henry Wadsworth Longfellow. He contributed to William Dean Howell’s Atlantic Monthly and later, as a publisher of his own magazine, supported several journalists, like Brander Matthews, who went on to become notable muckrakers and naturalists.

Like Twain, his views were generally progressive for his time, with little patience for religion – “Altogether too much thought is give to the next world. One world at a time ought to be sufficient for us.” – and less for politics – “The great number of offices, and the facilities for acquiring them, in a democratic state, induce at intervals an indecent scramble for offices, from which the men of superior worth, after a season, are apt to retire in disgust, leaving the field to be occupied by the less worthy and the more importunate.” But, unlike Twain, Bovee believed “only the optimist looks wisely on life.” “A genial optimist who praises much scatters flowers in our way,” he wrote, “A pleasant illusion is better than a harsh reality.”

"The man who isn't a pessimist is a damned fool."

10 thoughts on “The Apocryphal Twain: “Kindness is language the deaf can hear.””